On Friday I had the pleasure of working with Career & Technology Studies teachers in Grande Prairie presenting my workshop, "Ready, Set, Sew...and Beyond!"

Participants explored multiple fabric painting techniques in the morning, and then sewed in the afternoon while their paintings dried. We covered a lot of ground in a very short time!

Next, working on wet fabric:

And then some sewing: 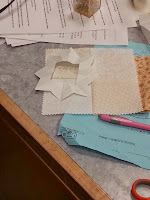 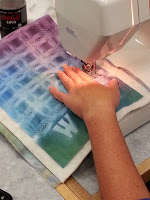 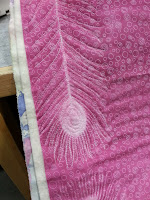 And finally, the big reveal! 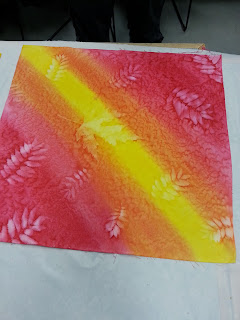 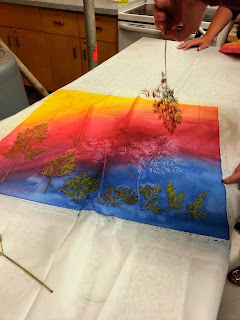 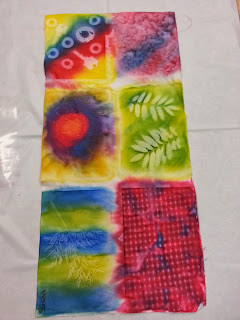 What a wonderful way to spend the day!

The work shown in this post was done by class participants. They certainly embodied the spirit of Try, Learn, Grow!

Posted by Carole @ Fresh off the Frame at 15:33 No comments:

"Electric Stripes" is currently stretched out on our family room floor, drying.

I pinned into the flooring to secure the quilt's edges. We have industrial grade carpet, so a little moisture doesn't bother it, and neither do pins. (Pins are only a problem if I forget one on the floor...eek!)


As you can see, the quilt is not bound.

This is the first time I've tried washing and blocking before binding.

Variation in quilting density caused the quilt to shrink up more in some places than others.
It was no longer perfectly square, so binding it would have been less than successful.

Blocking has allowed me to coax the quilt back into shape. When it is dry, it should hold its shape and come out beautifully...or so the theory goes!
(here's hoping!)

This morning I found all this gorgeous, quilty texture!

The top layer is drying first, so the colour is looking more like it should. It looked almost red when it was wet.

Oh, and I decided to leave my first, "ugly" feather that I'd previously intended to rip out & re-do. I have learned many things on this quilt, and want to be able to look back and see how far I've come.

Honestly, there is so much texture that quilting imperfections visually "disappear".

Unless you are looking for flaws, of course.

But I think that is better left to the Quilt Police.

Meanwhile, back at the ranch...

Stretching out is not always easy, but sometimes it's necessary.

Electric Stripes is on the frame, and I'm both excited and terrified!


No pressure.
My first attempt at longarm feathers will be out there for all to see - gulp.

I purposely left lots of open space on this quilt to force myself to try new things.

Next, I did the straight lines. Parallel lines on stripes could have been a nightmare, but I must have done something right because it worked out great!

The stitching doesn't interfere with the illusion created by the piecing, either...whew. Sometimes what you hope for and what you get are two different things, but not in this case.


So...on to the feathers.
I've drawn a ton of feathers, and stitched them on my domestic machine.
I know I can do this (internal pep talk while fighting the urge to run away)

First attempt left much to be desired. I did promise to be honest, so here's the ugly truth:

Practice on the side? Nope, just dive right in and try it right on the quilt.
(nope rhymes with dope...just sayin)

Oh, and I don't have a thread that matches any better than this...so everything I do is guaranteed to show.

I tried the echo plume method, but not enough control left me hating the effect.


Hmm. Perhaps I shall leave the small feathers for a while and start with the long plumes. I'd marked guidelines for the spines and to indicate the spaces I wanted to fill.


I've been working on my Log Cabin Challenge in the evenings. I'm hoping to have it ready for the guild show, as well. Finished challenges are hung together, and it is so interesting to see what everyone does.

My project is from the book, "Not Your Grandmother's Log Cabin", by Sarah Nephew and Marci Baker. 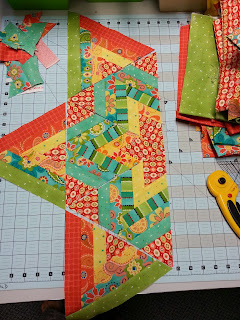 
I'll leave you with a photo from my "commute" through my garden to the longarm.
This plant thrives despite nightly frost.

Preparing for classes and workshops was my focus this week.

First up, it was my turn to teach a skill at guild.
I decided to show two different ways to finish art quilts, which was a good excuse to finally complete this little piece:

Next up, preparing 12 meters of fabric for a painting workshop:

Some of the fabric I painted this summer has been made into kits for a "Ready, Set, Sew" workshop:


And scraps have been rounded up to make mini cushion kits, too. 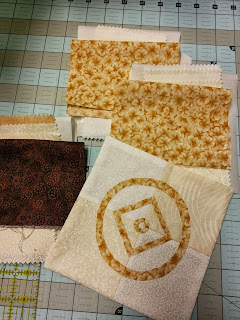 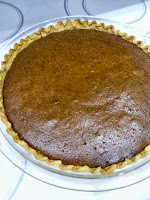 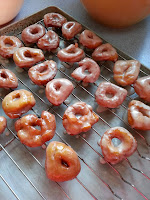 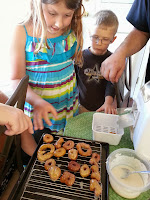 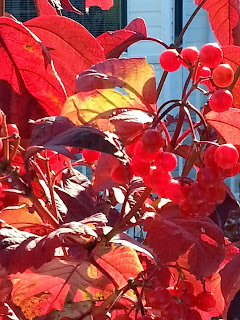 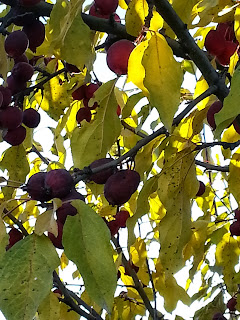 Posted by Carole @ Fresh off the Frame at 20:17 No comments:

1. Figured out what to do with this:


Last October our guild invited Margie Davidson up from Edmonton to teach her "Add A Stripe" workshop. We learned so many interesting ways to use striped fabric. This was what my brain came up with that day.


It's been languishing on a design wall ever since.

At one point I sewed some fabric to it.

Yesterday I ripped that fabric off again...what the hell was I thinking??? Seriously. What. The. Hell.


I then got busy and put pen to paper (should have used pencil, but why do things the easy way?) and came up with a design.

Here it is, in progress:


Tonight it is finished and ready to quilt, but I'm not going to show you any more until it is stitched. There is a lot of "blank" space at the moment, but the quilting will take care of that.

Next goal is to have it ready to show in our guild's annual "hanging" in the library. In November. Is it the last minute yet??


No photo to share yet, but I promise:  it's also ready to quilt. The backing is also pieced and ready to go.

This has been my ongoing "Challenge To Self" for a while now.

In addition to my cupboard, I have two drawers of fat quarters and about a dozen large pieces that I'm able to use for backings.

One would think this challenge would be easy. Nope. It is definitely a challenge.

How I've met the challenge this month: