This started as a white cloth and a desire to experiment with Caran d'Ache Neocolor II pastels.


A photo I'd taken during cherry blossom season in Japan was my inspiration for the piece.


The figure is intentionally reversed. I'd drawn the image on tracing paper and moved it around on the fabric until I was happy with its position. Tracing paper allows the image to show even when it's flipped over.

As you can see, I then free-motioned quilted the lines through the tracing paper and onto the quilt sandwich.


After the first round of stitching I pulled away the tracing paper and did a second pass to darken the lines. Sometimes I intentionally "missed" the lines because I love a "sketchy" look, but I didn't stray too far. In my mind, accuracy seemed to fit the character of this piece.

Now for the experiment.
I've used the pastels in water-colour fashion, but wondered how much control I could exercise. Was it possible to keep the colour inside the lines?

Using the pastels like crayons, I coloured in the dress - dry pastels on dry fabric.


I used a fairly stiff paintbrush to sparingly apply water. My goal was to use enough water to activate the pigment, but not so much as to cause the colour to bleed into the background.

This went better than anticipated!

I would have been more accurate had I walked to the next room and found a smaller brush, but at the time I thought "what the heck" and used what was handy. I figured the whole thing could go straight to pot, so why invest too much effort, ya know?

But then it worked pretty well. Figures. Ha!

I used the same process for the umbrella, but by then I was pushing to see how much water I could get away with. There's not much wiggle room. You can see the wicking around the edges that even a tiny bit of excess water caused.


I wanted to add cherry blossoms, so repeated the entire drawing, stitching, colouring, painting process. After heat setting my work, I was able to wet the piece and start developing a water colour-ish background.


I didn't mask the parts I wanted to keep white - just avoided getting those areas wet. Worked pretty well.

As I went along, I wondered what would happen if I quilted some extra flowers using pink thread.

I don't love 'em, but they provided some valuable lessons.

What I learned for next time:

We had a good dose of snow over the weekend, but it quickly melted. My Mom spotted these beautiful blossoms on our river walk yesterday, so of course I whipped out my phone for a quick photo. I'm glad I did! We think they are wild honeysuckles. 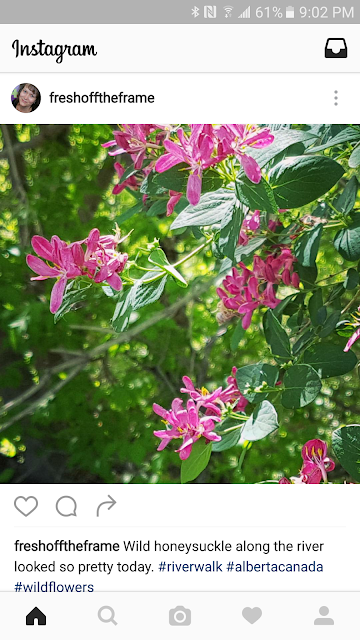 Even the Kitchen Sink!

History in my sink!
Photos provided by our local museum will soon be sewn into raffle prizes by our quilt guild. The town is celebrating the 100th anniversary of both the D.A. Thomas, a steamboat that transported goods and people up and down the Peace River, and the completion of the rail line (and the station) connecting Peace River Crossing (now the town of Peace River) to the rest of northern Alberta and BC.


First prize will be a generous lap quilt. Its photos will be framed up with "photo corners" reminiscent of times gone by.


Second prize (wall hanging) will feature photos surrounded by crazy quilting as another nod to the past. I don't have a photo of it yet, but I do have a photo of third prize, in progress - soon to be a bag. We plan to finish piecing all three projects by the end of May. I'll keep you posted!

A Quilt for Fort McMurray
We have been watching in horror as wildfires have ripped through Alberta, and are especially distressed for the people of Fort McMurray who have lost homes and businesses. Brynne heard about the gathering of quilts for those who have been displaced, and promptly pieced a quilt to donate. She wanted to quilt it herself, so we spent an evening getting it done.


This was Brynne's first time free-motion quilting, ever!
(My old machine that she uses for piecing doesn't allow that function, so when I say first, I mean it!)
In fact, this is her second quilt, ever!

Her quilt needs trimming and binding, and then we will get it to a collection point in Edmonton. Delivering warm fuzzies to someone who could use a hug is commendable, indeed. Nicely done, Brynne!

Making Backgrounds
Tonight was my turn to present an activity at guild, and I'd promised something about doodle quilting when I signed up wayyyy back in September. Doodle quilting is quite fun, no matter how you do it! I tend to use one of two approaches:
Rather than carrying my machine to the meeting, I prepared samples to show my process. Here is the doodle I prepared using the first approach.


The inspiration for this doodle was a photograph I'd taken in 2009 when we were in Japan.
To be continued in a later post. For now, I'd like to focus on approach number two!

I thought it would be fun for people to prepare backgrounds for doodles of their own, and it was!

Pastels can be added "wet" or "dry" for different effect. When pigment is added to wet fabric, the colour tends to be softer and less controlled, like this:

When applied to dry fabric colour tends to be more vibrant and there is a bit more control over colour placement and blending.


Ha! Bet you thought I was crazy for a second, didn't ya?

It's not too beautiful at this stage, but it gets better, I promise!

Even though the colour is applied dry, water must be added (brushed on) to dissolve the pigment and meld it with the fabric.

Now, back to the group.

Here is a beautiful example of working on wet fabric. When this dries it will be even softer and less intense - exactly the effect its maker hopes for! (She loves pastel colours)


The spirit of experimentation and play was alive!


This little painting could stand on its own - wish I'd thought to take a picture when it was finished.

Pre Mother's Day trip to the greenhouse - it smelled so good in there.


Quilting, quilting, quilting!
Did several of these little numbers. Each was slightly different, so I changed up the quilting designs, too. The idea of swirling snow was the guiding notion behind my choices.


The next two shared a backing so it was more efficient to use the same design on both.

Four generation road trip on Mother's Day. My Mom, daughter, granddaughter and I went shopping together!

Whew.
I thought I'd made more quilting progress, but gosh . . . so many things to do, so few hours in a day.

Well, maybe staying up so late.
It's now 3 a.m. and tomorrow waits for no one.
G'night!

Try, Learn, & Grow!
Carole
P.S. I'm also on Instagram under my blog name, FreshofftheFrame
Posted by Carole @ Fresh off the Frame at 03:09 6 comments:

As promised, I've been working on client quilts in earnest this week!

Another one by the same quilter - so bright and cheerful!

The next one will be a grad gift for a client's grandchild - such a special gift to give and receive.

Blue thread over the embroidery doesn't interfere with the motifs on the "train" quilt.


We have had some gorgeous weather this spring - unusually warm - which means . . . flowers!!!
Well, flowering shrubs, anyway!


I took a picture of the tippy top of our flowering plum because I thought the branches were pretty against the sky. The whole shrub was swarming with (happy) bees, so I didn't hang around for long.

Also a spring thing - I'd saved some chocolate tomatoes (for seed) in the fridge over the winter. Very scientifically, I might add - thrown in a bowl with a note on top saying not to eat them. I stuck their sad-looking remains in some dirt in March, moistened the works, and waited. And waited.


Last week some green clusters popped up! Each cluster came from the seeds in a single tomato. There are a lot of seeds in one little fruit.

Not all the tomatoes have sprouted - only 5 clusters out of 15 possible - but I consider this experiment to be quite a success...all things considered. (I feel obliged to remind you of its scientific validity. Ha!)

I will let the plants grow a bit before attempting to untangle their roots and separate them. If even a couple are successful we will have tomatoes coming out our ears - they are heavy producers of delicious cherry tomatoes. Wish me luck!

Try, Learn, & Grow!
Carole
P.S. I'm on Instagram under my blog name FreshofftheFrame - see you there!
Posted by Carole @ Fresh off the Frame at 21:36 7 comments: